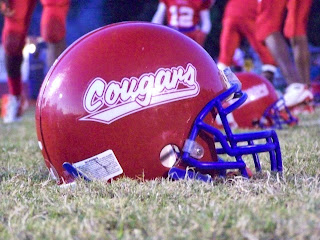 Unlike some other nearby schools, no one can accuse the Helena-West Helena Central Cougars of having a soft nonconference schedule.  When kickoff arrives on Friday, the Cougars will be hosting the Dollarway Cardinals, who are ranked in the Top 3 of Class 4A in three separate polls.
The Cardinals are #3 in both the Hooten's Arkansas Football and Fearless Friday Polls.  The Associated Press had Dollarway at #2.  The Cougars received four votes in the AP poll.
Coach Russell Smith said he wanted the Cougars to have an early test.  "I believe that having tough games early prepares you for conference play.  We are trying to establish ourselves as one of the elite programs in our classification and region.  The only way you do that is to take on some of the best teams and win.  That's why we have a nonconference schedule that includes a top 5 Class 4A team and Forrest City, which is in a higher classification."
The Cougars battled Dollarway tough last year, trailing by only seven points most of the fourth quarter before falling 34-19.  Dollarway went on to win 10 games.
Helena-West Helena has a squad filled with veteran leadership.  Nine starters return on offense and eight return on defense from a squad that had a winning season and returned to the playoffs as one of the state's smallest Class 5A schools last year.
Smith said, "We have a lot of experience.  Our lineman are strong.  We have some speed at the skill positions.  If we continue to work hard and play smart, mistake-free football on  Friday nights, we will have a good season."
Dollarway returns six starters on offense and five on defense.  Smith said, "They have a lot of size and speed.  They are very talented at the skill positions.  We will have to play a great game to win."
Another addition this season is a major renovation to Cad Polk Stadium.  The school district, with a contribution from the Booster Club, is completing a much needed reconstruction of the bleacher seating.  Coach Smith said, "Our facilities have been neglected for far too long and we have gotten way behind our competition.  This will greatly enhance our stadium and I am hopeful that this is just the beginning as we seek to get on par with the rest of our competition."

Posted by The Inside Scoop Staff at 6:47 PM