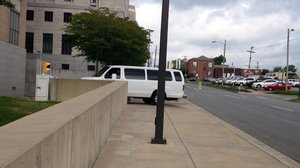 A federal van arrives Monday, May 20, 2013, at the federal courthouse in Little Rock, where Treasurer Martha Shoffner was set to appear.

A criminal complaint charging her under the Hobbs Act, or "extortion under the color of official right," from late 2009 through May, was released ahead of her appearance Monday before U.S. Magistrate Judge H. David Young.

Shoffner, 68, admitted to receiving $6,000 cash payments every six months and that she "admitted she knew it was wrong to accept the payments," according to the complaint.

She had begun asking for payments to help finance a Little Rock apartment, the complaint says.

The complaint states that Shoffner received some payments concealed in a pie box, rolled up with a pie bought from a Little Rock business.

The Democrat, who has been treasurer since 2007, has been under scrutiny over the past year about the way her office has handled state investments and whether she received any benefit from the office's purchase of more than $500 million in bonds through St. Bernard.

She also has faced questions about past campaign contributions. The complaint states that the broker gave her a $2,000 cash payment and a campaign watch-party sponsorship in the form of about $4,700 in cash.

"Today, I am calling on Treasurer Martha Shoffner to resign her office as Treasurer of the State of Arkansas," Republican Party of Arkansas Chairman Doyle Webb said in a statement. "While our justice system provides for her presumed innocence until proven guilty, the wrongful acts that are alleged are very serious in nature and are directly related to her official duties as State Treasurer."

Reports that the FBI was investigating Shoffner had circulated at the state Capitol for months, especially after a legislative committee in January referred an audit done on her office to state and federal law-enforcement officials.

The audit concluded that the state treasurer's office's decision to sell some bonds before they reached maturity had cost the state about $434,000.

Shoffner said earlier she did not know why her office sold the bonds prematurely and buy more from the same firm.

We will continue to update this developing story. Read tomorrow's Arkansas Democrat-Gazette for full details.