Today's Arkansas Democrat Gazette reports that Anthony "Duece" Banks has been suspended with pay after being recently arrested for abuse of office, sexual assault and indecent exposure charges earlier this week or late last week. 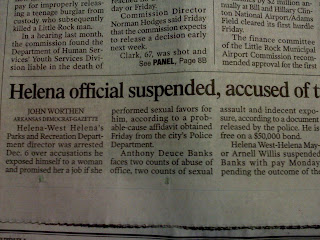 Mayor Arnell Willis is reportedly "praying" for Banks and reminding citizens that Banks is "innocent" until proven otherwise. The two victims have not been asked how they feel about all of this.

According to the report on one of the victims, Banks wanted thirty (30) seconds of oral sex, fifteen(15) seconds of sexual intercourse, to kiss the victim's neck and squeeze her buttocks. This sounds like lyrics to a rap music song which talked about "Lick my neck, my back, my  . . . and my crack." However, these are sworn affidavits where the victims have taken an oath to tell the truth or face criminal penalties for lying under oath or providing law enforcement with false information.

Banks could not be reached by the reporter for comment.