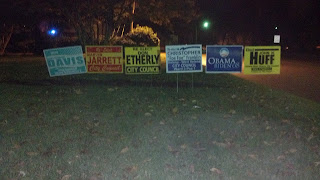 It's October in a presidential election year and of course, campaign signs are the norm.  It always seems that much is at stake during any election cycle and this one is no different for the citizens of Helena-West Helena.  While Phillips County voters will select a new sheriff, Helena-West Helena voters will decide whether they will pay an additional $15.00 per month on their water bills.  There is no box on the ballot for voters to check yes or no on a sanitation fee increase but instead, the choice will be made based upon the candidates elected in the City Council races.  Every seat for the ten member council is contested. 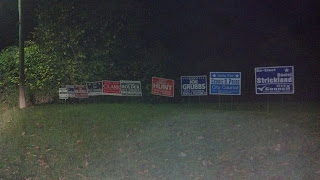 Two years ago, a new administration swept into office when Arnell Willis defeated James Valley in the mayor's race.  Bruce Hudson filled the position of 'also ran' during that election.  Willis promised to prove that the city was bankrupt and then restore it to financial solvency.  Neither has happened thus far.  That is, at the time Willis took office in January 2011, the city was flush with approximately $400,000.00 in cash.  The city did have some unpaid payroll taxes which were eventually paid from Water Department funds.  However, the city was far from bankrupt which was evidenced by a nearly year long fight by the administration to obtain pay raises for some elected officials and employees.  The new administration also rewarded supporters with unapproved contracts and lawyers with fees and retainers.

As pages on the calendar slowly turned ahead, Mayor Willis repeatedly proclaimed that financial recovery was underway.  Finally, in November of 2011, the adminsitration reported that the debt that once topped $1,500,000.00 had been reduced to a mere $143,382.79.  This glowing report meant those much sought after pay raises were now in order as a reward for a 'job well done.'  A budget was finally approved without a veto and the council approved pay increases to the tune of over $20,000.00 each for the Mayor, City Attorney, and Treasurer but, that was not all.  The Mayor continued to fight for pay increases for department heads and finally cast a tie-breaking vote in February 2012 that equally divided $15,000.00 between only 2 employees.  What followed were revelations of declining revenue along with unchecked spending which sent the city into a financial tailspin.


While refusing to take back any of the ill-advised pay increases, the Mayor and a few members of the City Council have argued that the city should increase its sanitation fees by $15.00 per customer to make up for declining revenue.  The increase would be shown on all water bills.  All of this creates the backdrop for November 6, 2012, the date that has been described by Mayor Willis as a 'narrow window of opportunity' to speed along financial recovery.  Willis is referring to the fact that certain candidates will vote for the fee increase, if elected.  This means the citizens will actually vote for or against the increase by choosing their candidates. The results are sure to be interesting so, stay tuned!