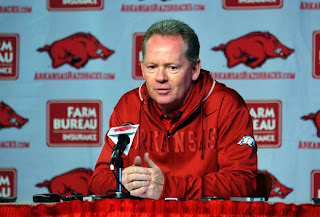 FROM THE ARKANSAS DEMOCRAT GAZETTE:

The crash happened around 6:45 p.m. Sunday night on Highway 6 in Madison County near the Crosses community. Crosses is located about 23 miles southeast of Fayetteville.

Bill Sadler with the Arkansas State Police said that it was a single-vehicle crash that happened when Petrino's motorcycle left the roadway.

According to Sadler, Petrino was transported to a hospital in Washington County, where he was admitted and kept overnight. Petrino was not listed as a patient at any of the major hospitals in Northwest Arkansas on Monday, so his condition was unknown.

Patients can ask their name be withheld from a hospital's roster, citing the Health Insurance Portability and Accountability Act (HIPAA).

A source told the Arkansas Democrat-Gazette that Petrino suffered multiple broken ribs, "all kinds of cuts and bruises", and a neck sprain, but is expected to make a full recovery.

In a release, Petrino's family said he was in stable condition, but didn't specify the severity of his injuries.

"Our family appreciates the respect for our privacy during the recovery," the Petrino family said, "and we are grateful for the thoughts of Razorback fans at this time."

Petrino, 51, is entering his fifth year as the Razorbacks' football coach. He is an avid motorcycle collector and had four when he spoke about his hobby during a 2008 interview with the Morning News of Northwest Arkansas.

"It's relaxing to me. You get out and you get to see good scenery, and I like to ride up to Beaver Lake. It's pretty up there," Petrino said in the interview. "I've been around the outdoors. I grew up around the outdoors my whole life."

Thank you for coming to the website of the Arkansas Democrat-Gazette. We're working to keep you informed with the latest breaking news.