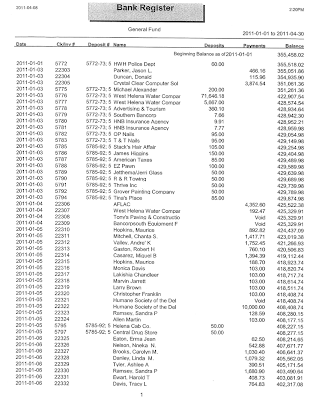 Helena-West Helena --- Mayor Arnell Willis has laid off another set of employees. This was regular news for a while during 2011 when he vowed to "right the ship." He fired 12 employees in early 2011 and told the Arkansas Democrat Gazette that he was saving $100,000.00 per month. It has been 15 months and the mayor should, therefore, have about $1.5 million dollars in savings. Add to that the fact that the mayor, according to his reports, inherited $355,458.02 on 1/1/11 and that balance had increased to $429,874.98 by 1/3/2011 with outstanding deposits left over by the former administration.

Our mayor, however, has been on a tear ever since taking office with poor spending habits. First, he paid a lot of new employees on January 6, 2011 a regular payroll check. However, the pay period for that pay check closed in December 2010. That means that if a person was not on the payroll in December 2010, he or she was not supposed to get a check on January 5, 2011. Notice on the report that Allen R. Martin, the mayor's Chief of Staff is paid by check number 22400 in the amount of $1,192.66 in take home pay. Also notice that the payroll includes the old and new Parks Director and the old and the new Sanitation Director. You should ask yourself, how could two directors, who did not work during the same pay period, get paid at the same time? 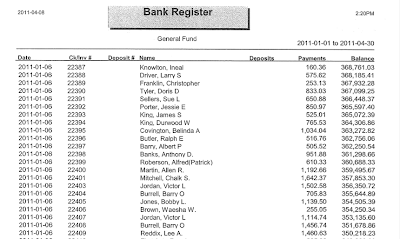 We point this out to show the kind of spending the mayor has engaged in and why perhaps the city cannot keep on sound financial footing. Additionally, the mayor blames the former administration for the current crisis. However, the sources of funds has not changed and the old administration is gone. If the mayor saved $100,000 per month by firing the first slate of employees and "righted the ship" by being thrifty and responsible, then it would naturally be impossible for the city to now be teetering on bankruptcy; financial ruin and receivership status.

We will supplement this report after receiving additional information pursuant to an outstanding Freedom of Information Request.
Posted by James F. Valley at 9:30 AM