HELENA-WEST HELENA, AR-- This week, the Phillips County Jail has gained at least two (2) new occupants as a result of the involvement of the U. S. Marshals Service in local crime fighting. On the murder of Charles Watkins, Jr., the U. S. Marshals tracked Mr. Antonio Jamar Rattler to a remote location in Dekalb County, Georgia. Rattler is now housed in Phillips County's Hickey Detention Center.

Today, within the last several minutes, Mr. Eugene Starr, Jr. was checked through the booking area of the Phillips County Jail. Starr was hunted as a suspect in the murder of Mr. Deven Williams. Starr's co-defendant, Mr. Lakeithon Deon Moody submitted himself to arrest on Tuesday, July 26, 2011; less than 24 hours after the murder. Local radio station KJIW's news division aired portions of The Inside Scoop Online's report regarding Moody and Starr. That broadcast informed the general public that harboring or assisting a fugitive is a crime under Arkansas law. 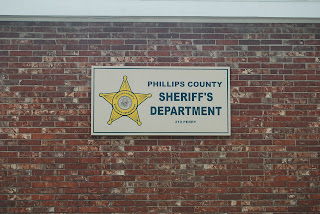 In spite of all of the notoriety presented by these incidents, Starr was on the lamb from Monday, July 25, 2011 until just moments ago. The U. S. Marshals Service entered several homes on yesterday searching for Mr. Starr. The marshals detained (or arrested) four (4) black males in downtown Helena. These males were driving a rented white Chevrolet Malibu. This car has bullet holes in it and was suspected of being a part of the recent crime spree. Those four young men, however, we released without incident a few hours after the detention began.

The U. S. Marshals Service, using sophisticated technology, were able to track Mr. Starr down to an area in North Helena where he was found in attic. Several law enforcement agencies have actively worked to bring these individuals to justice including but not limited to the U. S. Marshals, Arkansas State Police, Phillips County Sheriff's Department (& CID) and the Helena-West Helena Police Department ( & CID).

No court date has been announced for Starr or Moody. However, Starr, Moody, Rattler, and the four gentlemen held in the murder of Ms. Crystal Rattler can, but may not, each appear in court at Phillips County's next term of court in August 2011. That term begins August 15th and continues through August 26th. The plea and arraignment date is August 8th. The fact that the next term of court in soon does not mean that these defendants will be on that particular docket.
Posted by James F. Valley, Esq. at 5:08 PM