It was a hot and humid Saturday evening. Clausey and Sandra and the family were headed to PCCUA for a "friend's party." Clausey did not know for whom or why the party was occurred. He was, with a shrug of his shoulders, he went along with "San" as he calls her.

When he arrived, he noticed a few people who were familiar to him. He wondered aloud, why is he here? He said, what's going on? "Myton," San called out. "We need to get Big Momma," she continued. "Okay, okay, I'm coming." Clausey responded. "Myton," San called out again. "Put your jacket on!" she cried. "San, it's just a party, why do I need this jacket?" Myton query. It was hot and humid out there.

Up the ramp and through the doors, they made their way into the lobby of the Lily Peter Auditorium. The crowd was waiting in the community room. "Sign the book Mr. Myton," said one of hosts. "Okay, I sign the book, but I don't know why." said Myton. Hey "James, man it's good to see you. What you doing here?" Myton asked of James Morrow. James uttered a response. But it was not clear what he said.

Sandra Myton, wife of Clausey Myton and "San" as he calls her, took Myton toward the auditorium for what appeared to be a final inspection before he was to enter the room where the crowd was waiting on him. Some of the  hosts whispered, "we are ready" and "it's time."

San and Clausey entered the room and people began to rise to their feet and in unison shout "Surprise." Clausey was overcome with joy and emotion. He cried real tears. He was surprised, honored and grateful. Clausey went throughout most of the room greeting each person at each table with a hug. There were young people and not so young. There were dignitaries, educators, politicians and common folk. It was the kind of crowd Clausey liked. 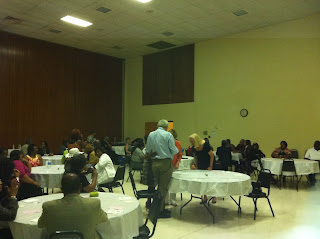 A short printed program was used to guide the occasion prior to dinner being served. Mrs. Debra Myton, Clausey's daughter-in-law, led the program. She provided an overview and called upon the speakers one by one. At the end, she opened the floor to "anyone else" who desired to speak but no one took the microphone.

Among the speakers were Ms. Shakeia Williams (San's daughter) who Myton taught and help to nurture from a tender age, Chet Myton (Clausey, Jr.) Bill Myton, grandchildren and former students. One student told the story of Myton being designated her dad by a former school superintendent. She took the title well. However, she refused to claim the title while in a church at a funeral visitation recently. Alex Sylvester is a now a retired state trooper. Myton taught him and co-signed for his first car. Myton said to him "if you miss one payment, I am picking the car up!" Sylvester paid that car off early. He said that Myton inspired him to go to college, graduate and start a career. 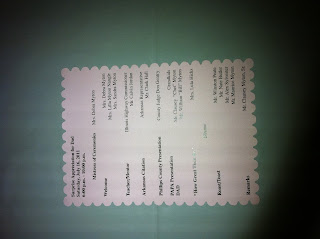 Myton was apparently big on "doing homework." Student after student told that they either did their homework or if they did not he paddled them. One such student had been at Pizza Hut with Myton on the night before she failed to turn in her homework. "Pizza Hut is not excuse for not doing your lesson." Myton told her as he paddled her.

Myton is a retired teacher, current community activist, current justice of the peace, father figure to many people and good all around guy. He took it in stride that his sister and brother could not make the event on time because they had a layover in Atlanta's airport. He took in stride the absence of friends and well as the accolades bestowed upon him by politicians including County Judge Don Gentry and State Representative Clark Hall.

Sis. Lula Hicks sang "How Great Thou Art" soon after San prayed an inspired prayer. The event was a look back; filled with reminiscence and a look forward to influence of Myton playing out in the lives of his son's and other children for whom he was and is a father figure. Myton's grandkids, one on Chet's and one of Bill's expressed their love for their granddad just as you might expect a grandchild to do.

In the end, everyone enjoyed the party and Myton was surprised!!!