In the request, signed by Larry Brown, Christopher Franklin and Daniel Strickland, the council members have requested that Mayor Arnell Willis direct Police Chief Ray Price to attend the meeting tonight. Reports have it that there is tension between the mayor and the chief. Chief Price reportedly has sent message to the council expressing his resentment for their "interference" with his position as police chief. He has refused to allow Bowers to return to work.

Interestingly, within hours of Bowers' reinstatement by the city council, he apprehended a burglar on Parkdale Street. The owner of the property issued a letter of thanks to Bowers and the city council for the work that they had done. 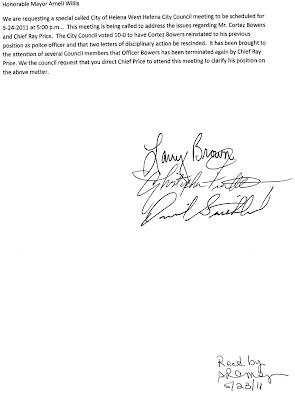 Bowers alleged termination had to do with an allegation that he used excessive force on an inmate in the Phillips County Jail. The prosecutor filed formal charges against Bowers and later dropped the charges.

Bowers is a police officer and would generally be required to appear before the Civil Service Commission. However, the city council voted 10-0 to reinstate Bowers in part because it determined that Bowers had not been properly terminated in accord with city policy. In other words, the city council found that the decision makers did not follow the proper steps for a termination.

This situation highlights an interesting conflict in the operation of city government. Who should make these choices? The elected city council? The appointed Civil Service Commission?

Chief Price and his staff were not pleased with the news of Bowers return even with him solving the burglary. It seems that Price and his staff are determined to ouster Bowers. Generally at 10-0 vote has teeth and meaning. Maybe in Helena-West Helena it does not.

The questions at this time are who is in charge and what will be done about this situation? Who is right? What is right? Can "they" do that?

The meeting will likely be re-broadcast on KJIW FM 94.5 (internet http://www.kjiwfm.com Listen Live Link) at 10:05 p.m.  Jim Riley with Videomasters usually broadcasts the meetings using USTREAM Livestreaming. We will post that link at 4:30 p.m.
Posted by James F. Valley, Esq. at 8:23 AM