The water is likely, according to our sources, rain water run-off which is building up inside of the Walker Street Levee because the gate is closed. The water is seeping because the water levels have not been this high at any point in recent memory. The danger from this seeping is expected to be minimal because the water is not under pressure and the strong force of the Mississippi River waters will not have an impact at this time.
Street director, Oscar Hoskins (8703380180), acted to close the section of the Walker Street Levee between Cherry and Walnut Streets in an abundance of caution. Mr. Hoskins observed a few "soft spots" in the roadway and chose to be "safe rather than sorry" as he carried out his duties. Mr. Hoskins has been monitoring the river situation and speaking with the appropriate officials about the next practical steps which should be taken by the street department in order to provide proper service to the local residents.

Inside Scoop has heard complaints from several residents in the Ohio, Adams, Cherry, Jefferson, Pecan, Madison, Monroe, Walnut and Jackson street areas of "North Helena." These residents claim that they are now experiencing soft and soggy lawns. They are seeing water backing up into drainage ditches and many other water related matters of concern.
We have produced the following video to explain the Walker Levee Drainage issue facing North Helena residents. The Walker Levee Drainage begins just west of College Street about midway the block between Adams and Walker Streets. This b 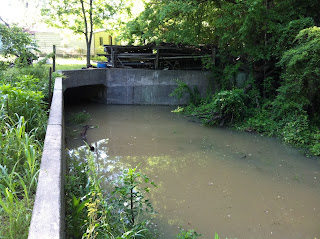 This entry point is being fed by continuously running water from the Springdale Road area near the Kingdom Hall and the Wire Road area near Magnolia Cemetery. This water is channeled through the Walker Street Level on a regular basis. Except that the river is high, this water would drain practically unnoticed.

There have been requests made of The Scoop to ascertain evacuation plans in the event that the there is flooding of certain areas of town caused by the Mississippi River's high water levels. At this point, no plan has been shared with us. However, no imminent threat of significant flooding has been made known either. In other words, the water will get high, but, at this point, the water is not predicted to cause real problems. If this forecast changes, we will immediately inform you.

Posted by The Inside Scoop Staff at 10:58 PM