"Running, No Shirt, One Shoe; Half-Naked"

HELENA-WEST HELENA -- "He ran that way," exclaimed one of the witnesses. "He took off running," said another witness. "I don't know what's wrong with him," decried a third witness. The best witness said, "I saw him, I saw him; he went down the street, running with no shirt; one shoe and half-naked." 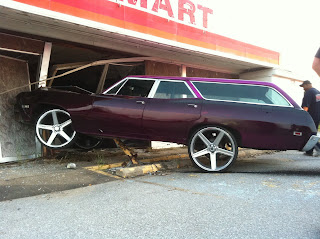 These witnesses were at or near the scene of a eery one car accident on yesterday evening. The old chevrolet station wagon, shown in the picture above, was a collector's item being restored and specifically designed for a new owner. Sammie Pruitt, Jr., came on the scene. He "had words" with a man on the scene and next thing they knew he was "turning donuts" in the gas station parking lot. Mind you, the gas station is closed and has been for several years. Mind you too, Mr. Pruitt, according to the witnesses, had nobody's permission to occupy or operate the vehicle. The crash probably explains why Mr. Pruitt could not get prior approval.

The Helena-West Helena Police and Fire Departments responded to the scene. Snyder's Wrecker Service responded as well. Mr. Snyder and a boat load of back seat drivers worked until the station wagon was removed from the store without doing significantly more damage to the wagon. Many of the onlookers had better ideas about how to remove the car without damage. None of them, however, had any tools to secure the safe removal they demanded.

At the time of this report, Mr. Pruitt is on the loose and being sought by the police for the damages done.