Here is the full text of the warning:

RECENT HEAVY RAINFALL COMBINED WITH BACKWATER FLOODING BY THE MISSISSIPPI RIVER HAS LEFT MANY AREAS FLOODED ALONG THE 100 YEAR FLOOD PLAIN. THIS HAS RESULTED IN NUMEROUS ROAD CLOSURES AND AREAS POTENTIALLY UNDER THE THREAT OF EVACUATION.
PRECAUTIONARY/PREPAREDNESS ACTIONS...

A FLOOD WARNING MEANS THAT FLOODING IS IMMINENT OR HAS BEEN REPORTED. STREAM RISES WILL BE SLOW AND FLASH FLOODING IS NOT EXPECTED. HOWEVER... ALL INTERESTED PARTIES SHOULD TAKE NECESSARY PRECAUTIONS IMMEDIATELY. 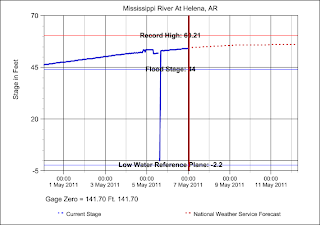 There are several high water areas along the Mississippi River in the Phillips County area. The Helena Improvement District put of the gates in the levee wall out of concern earlier this week. They also closed the gate on the Walker Street Levee to prevent a backflow of Mississippi River water into areas of town.

We have been made aware of rampant concerns about flooding and evacuation plans. At this point, however, nothing in the projections indicates that there will be a need for evacuation in the Helena-West Helena area of Phillips County.

The following video explains the seeping water in the Walker Street Levee:


The Scoop has gathered the following resource information (Phone Numbers) for Phillips County:

Stay tuned to The Inside Scoop Online for further updates on this and other important matters.

Listen to The Inside Scoop on KJIW FM 94.5 at 11:30 a.m. on Saturday mornings and 11:05 p.m. on Saturday nights. The broadcast are also available live at http://www.kjiwfm.com at the listen live link. Podcast are made available in our podcast section at the bottom of this webpage.
Posted by James F. Valley, Esq. at 11:09 AM