HELENA-WEST HELENA- Mayor Arnell Willis fired back at the City Council for hiring its own attorneys for the Pride, et al v. Willis lawsuit by sending out notice of his intent to veto earlier today.

The lawsuit, filed by Reverend Cedric Pride, Port Authority Board Member Jim Frazier, and others, asks the Court to allow Willis to operate the city without a budget even though the Council has passed four budgets that Willis has vetoed.

Willis appears to contend that he should be able to operate until the council passes a budget he wants. City Attorney Chalk Mitchell offered no defense for the city, saying the Plaintiffs were right about everything, which some legal experts say is evidence of this being a friendly lawsuit. Many of the plaintiffs are believed to be political supporters of Willis. Alderman Don Etherly said at the council meeting Tuesday night, "The City Attorney has taken a position contrary to the position of the City Council and is conflicted....We need representation." 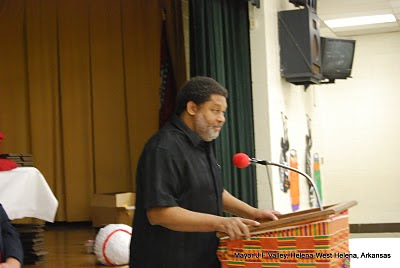 Alderman Marvin Jarrett, reached after Willis's veto was announced, expressed his frustration with the way Mayor Willis conducts business. He said, "Arnell Willis has shown that he is willing to lie, cheat, steal, threaten and entice in order to deceive the citizenry. His operation of the city without a budget clearly violates AR law. Lastly, I have told the mayor personally that we agree on some things but we will never agree on everything. Mayor Willis, you have a decision to make, and Shakespeare wrote it best - to be or not to be and - to thine own self be true."

Willis called the lawsuit, even though it appears to come from supporters and asks for what he wants a frivolous lawsuit in his reasons for vetoing the council's hiring of its own attorneys. Willis wrote, "Moreover, the city cannot afford to continue to waste its limited resources on frivolous litigation."

Willis's ability to veto this issue is in question. Similar issues arose in 2005 in the City of West Helena.

When contacted by phone, Attorney James Valley, who was hired by the council along with Attorney Robert Kinchen for this case, called into question the legality of Willis's veto. Valley said, "This same thing happened in 2005. Council members hired their own lawyer. The Mayor vetoed it, and Judge Bentley Story ruled that the council was entitled to representation."
Posted by Unknown at 9:30 PM