By Inside Scoop Staff

HELENA-WEST HELENA- Inside Scoop Online Co-Editor Andrew Bagley stood up for the right of the city and its citizens to have access to appeal hearings for fired city employees in the face of an illegal effort by Mayor Arnell Willis to close the hearings, which the terminated employees wanted open. 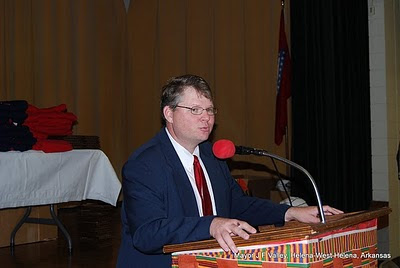 At the meeting, Bagley objected to Willis's insistence on an executive session. He said, "Mayor Willis, the FOI is very specific that if an attorney is present, then the hearing must be open." Willis attempted to silence Bagley, but Bagley insisted on getting the objection noted for the record and pointed out that the City could have to pay the legal fees of media groups under the provisions of the Arkansas Freedom of Information Act if it illegally went into an executive session.

Alderman Jay Hollowell then dialogued with Bagley on the proper procedures for an executive session. However, before a council vote could be taken on whether or not to go into executive session, attorneys for the fired employees pointed out that Willis did not have a court reporter present as required under the Arkansas Administrative Procedures Act.

Reached after the meeting, Bagley said, "The ability of our society to have access to public information is pivotal to a free press to keep the citizenry informed so that it can hold public officials accountable. I felt it was important for the public and media to have access to these hearings, and the executive sessions as proposed by Mayor Willis were not legal."

The hearings for the fired employees are scheduled again for March 15.
Posted by Unknown at 9:49 PM