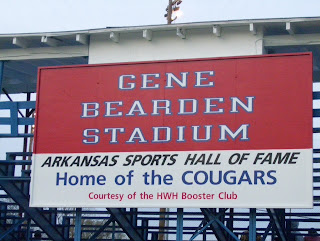 In an announcement from City of Helena-West Helena officials this morning, Mayor Arnell Willis has agreed to continue the Valley administration's policy regarding use of the Cleo Dunnings Park and Gene Bearden Stadium by the Helena-West Helena School District and the HWH Booster Club.  The major provisions of that agreement are as follows:


Athletic Director Walter Simpson has begun meeting with City officials regarding the items that must be completed in order to be ready for the baseball season opener on March 1st against the Barton Bears.  Simpson also urged the citizens to support the private fundraising efforts of the Booster Club.  Private support is becoming essential as the school district is forced to make painful cuts to the athletic budget.  Donations can be sent to the HWH Booster Club at PO Box 2774; West Helena, AR 72390.  Donations can be designated for a particular sport.
Booster Club Secretary Andrew Bagley was pleased that the parties involved were able to keep student-athletes above politics.  He said, "All of us, regardless of political persuasion, want the Cougars to win!"  Bagley encouraged all city officials to come out on the 1st to watch the game against Barton at 4:00 saying, "It will be a backyard neighborhood brawl.  Central is now playing Barton in all sports except football and a decent rivalry is developing."
Posted by Unknown at 12:27 PM