The Municipal League Has Spoken: Council Has Final Say on Finances!!! 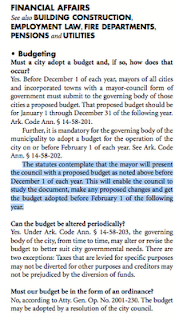 Not that this will matter to the people down at 226 Perry, however, we have learned that the Arkansas Municipal League has stated that the city council has the final say on city finances. I went out on the internet and did some research of my own. I found a booklet produced by the Arkansas Municipal League entitled Municipal Law in Arkansas: Questions & Answers. I have attached a snapshot from that booklet that deals with the budget questions we are currently hearing.

Mayor Willis says that he has to present the budget. It is true that the mayor must present a budget before December 1st. It is also true that council members may present a budget or alter the mayor's presented budget and finally adopt a budget of their choosing. The council can adopt ANY budget it chooses.

From a historical standpoint, the budget was presented last year by Mayor James F. Valley. That budget had been prepared by Valley, Mayor Elect Willis and others. The then present city council tabled that budget on December 21, 2010. On January 4, 2011, this city council asked for additional time to consider the budget that had been tabled by the previous city council. On January 31, 2010, this council rejected a budget that was prepared by Mayor Willis and was different from the budget presented on December 21, 2010 and January 4, 2011. Mayor Willis' January 31st budget is the same document that pays the sanitation director $45,000 rather than his base salary of $36,000 and pays the police chief $43,500. That budget had other concerns for the council members as well.
The council passed a budget on January 31st. The council has passed a second budget on February 3rd. The Mayor, exercising his right, has vetoed both of those budgets. He has declared an emergency because of his veto. The vetoes are his prerogative. He will have to prove that he has legal support in Arkansas law on this so-called emergency. Until now, it has been well settled in Arkansas that you cannot operate city government without a budget being passed for the current fiscal year.
The City of West Helena situation where the court authorized the city to function on the previous year's budget is different because that city council boycotted and did not pass a budget at all. This council has met and passed two budgets that have been vetoed. The mayor could, if he chooses, wait up to five days prior to issuing a veto. That way the city could operate five lawful days before being shutdown. In the meantime, he could negotiate with the council members on reaching an agreement in the best interest of everybody.
Posted by Unknown at 2:44 PM